We're back with another update in the ongoing tales of the Glyos System... 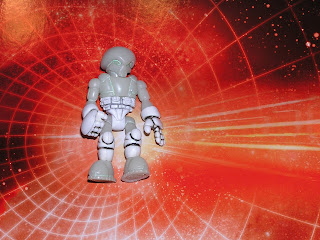 Today, we look at the Pheyden they call Phantasm.

He brings light to the darkness.

His true origin is unknown.

The first recorded sighting of him was in the quadrant around Metran, the planet containing the capital cities of the Glyos System.

His motivations - unknown. He has stopped Sincroid uprisings - and destroyed entire starships commanded by the Emperor's men.

Energy weapons do not hurt him. Projectiles, swords, mental attacks - nothing has stopped him.

And he marks all of his conquests with one symbol - a stylized P, formed of lines and dots.

Phantasm is out there. And he must be stopped.


HOW DO I MAKE A PHANTASM PHEYDEN?

Well, you need a Frontier Pheyden and an Empire Exellis (sold out from the Glyos store), for starters. You also need parts from an Andromeda Pheyden (also sold out). But what will really stop you from making this figure is needing the glow parts that are not included with the Andromeda Pheyden.
It is for the best - the Phantasm Pheyden is a dangerous addition to any collection. Proceed with caution.
Labels: Glyos KB Toys