Alright, so you can tell that I love the Glyos line of figures.
Admittedly, I was a late convert to the line. They didn't really catch my eye until the second six were released. So at that time, I was playing a bit of catch-up on the first few figures.
I started out with a small order - four figures - Standard Pheyden, Frontier Pheyden, Crayboth pack 1, and Cyber Ghost Exellis (who I referred to as Excellis for months afterwards).
My next order quickly followed about 2 weeks later, and my initial favorite was Rothan Pheyden.

I don't know what it is about the green that was used by Onell on this figure, but it feels...tough. I see the color and I think of this bruiser, battling the anomalies of the cosmos with his fists.
So immediately, I had to emasculate that feeling and create a figure that gave me an opposite feeling. 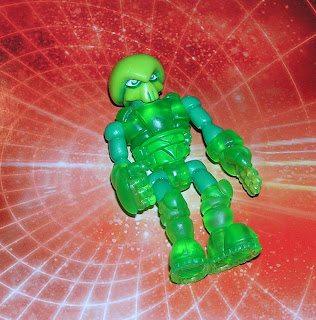 I was making an Indian companion for him, but ran out of parts.
I immediately saw potential in combining the different green parts from the initial Glyos figures.
What you see above was the result of the combination.

I dubbed this figure Fauna Pheyden. In him, I see a Pheyden who was "born" not as a fully formed being, but one which almost didn't make it. He appeared on a planet where the dominant lifeforms are nothing more than plants, and thus as the energy of the Pheyden effect coalesced, he adapted himself to the plants, becoming something not entirely Pheyden or entirely plant.

I did not want to have the stereotypical muck monster with a heart of gold character who can regenerate limbs and is cool, calm and collected all the time. Fauna is a being in tune with the environment around him, and finds that on the plant world, he is near omniscient. He can see through the plants around him. He can feel intruders as they walk over his grass. And he can move the greenery to hide himself, make paths disappear, or make Glyans disappear.
Fauna has taken the Pheyden mission of protecting the universe and twisted it into protecting just one world against all intruders. It remains to be seen what his reaction would be to another Pheyden stepping foot on his world...
HOW DO I BUILD A FAUNA PHEYDEN OF MY OWN?
It's simple!
Get a Rothan Pheyden and Phase Pheyden. Mix parts and Fauna can join your collection.
Posted by John K. at 9:03 PM