So, I love the Glyos system series of figures. You can look at previous posts to see that.
One reason is here: 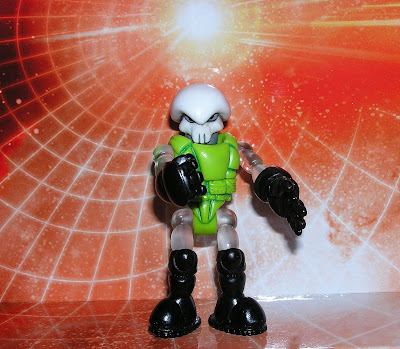 He had the darkest eyes. The devil's eyes.
This Pheyden figure is created from parts from four different Glyos figures, but looks different than all of its "fathers".

In my own Glyos universe - a copy of the one Matt chronicles on his Glyos site, created by a particularly powerful Pheyden moving through space and time - Pheydens are created by some quirk in the cosmic universe at seemingly random times and places. Frequently, they adapt to their surroundings - or in some cases, are affected by it.
This particular Pheyden, who is referred to as "Poison" by any species that he meets, was brought into existence on Planet Strane, a planet of amazing toxicity to all humanoid lifeforms. Due to its harsh nature, beings from outside of the planet rarely journey there. Inside the poison gases of the atmosphere, by the flesh-searing water, this Pheyden popped into reality.
Unlike many Pheydens, he does not have the ability to move through space and time. He has average durability in battle, and fights rather unremarkably. He does have unique qualities - he can process any of the poisoned elements of Strane without effect. Additionally, his touch destroys any poisoned or diseased element of the planet, which made him a hunted being.
He is healing a damaged world that does not want his help.
This has not done much for Poison's mind - he slowly is deteriorating in a world of harsh living.
His white skin coloring denotes that he may be related to Frontier Pheyden and his movement through time and space, but it has never been proven.

HOW DO I BUILD A POISON PHEYDEN OF MY OWN?
The head is from Frontier Pheyden.
The torso and waist are from Rothan Pheyden.
The arms and upper legs are from Phase Pheyden, but there a number of workable clear choices now.
The lower legs, feet, and hands are from Eclipse Pheyden.
Labels: Glyos toys