The three variants of Pheyden 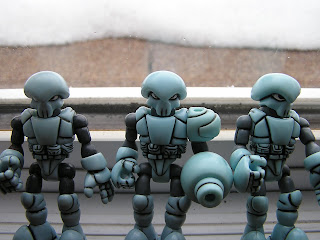 A quick photo of Standard Pheyden V1, V2, and V3 (for Adam).
I keep the first release Phase Arm on the V2 just so I can tell them apart myself.
The greatest color change is from V1 to V2 - V2 is much lighter in color.
Posted by John K. at 9:32 PM 1 comment:

Was I just BSing youse?

"If for some reason the Star Sisters don't perform as well as you'd like, will you view this as a declining interest in PoP, or will you see it more as "Well, maybe three-packs aren't the best way to go"?

Despite a vocal following, even us PoP fans have to admit that the sisters are obscure and unlikely to have the following of, say, Frosta or Glimmer.

Their seems to be a lot of speculation that the Star Sistets are somehow responsible for the subs selling lower to 2011. Let me use this post to clear all of this up. ;-)

First off, since we already hit above and beyond the min we needed to move forward with the MOTUC sub (as we have every year with Club Eternia) we already have the number we need. The set has already sold enough units. Anything day of is just gravy!

While not every figure is going to be for everyone, Star Sisters represents a lot of what MOTUC is all about. Here you are getting not only 3 (three) POP girls with a ton of new parts, but they were never before produced before and shown only in the 1987 catalogue!

When the line was thought out long term (around the time of Stratos) we did not have a "subscription" so the idea that the Jan-March releases would need to be special and "sell the sub" was not a part of it. The Star Sisters were always intended as the first 2012 large size item/multipack and had nothing to do with enticing fans for a sub since one did not exist when they were slotted in. The figures that are Jan-March are just the first three month's figures. Only the "sub only figure" (i.e. Shadow Weaver, Wun-Dar) was thought out as an enticement for subscribers. Otherwise you are just seeing Jan-March as thought out before we even had a sub program.

The whole point of sub holders are they are "all in" no matter what. Prototypes, 200X, Filmation, vintage line, NA. For this segment of our customers it doesn't matter, they just want new MOTUC figures. Period.

Obviously their will be cherry pickers and we do plan for that, but in the end, the line would do just fine if we limited it to a sub only and didn't even bother with day of sales.

As long as you keep buying them, we'll keep making them. Hopefully in time people will look back and really see Classics as hitting every major faction and era. We just can't do it all at once. It takes time. Hang in their, the line is planned out well in advance. It is going to be a wild ride but if can crank this out year after year everyone will hopefully wind up with their favorite (you have noticed we are doing Fearless Photog right? Who ever thought that would happen? But it did! This is MOTUC, we'll try almost anything MOTU if their is enough of a customer base to buy it!)

We have a road map. We'll alter it as needed, adding in figures when we rights change (i.e. Filmation, etc...), and it should get us a heap of toys before we're done!

Again, the thing to think about in all this madness that you see online is that you need to think about these things as a business, not as fun toys. IT IS RIGHT ABOVE - the MOTU Classics line can exist, as is, WITHOUT ANYONE OTHER THAN THE SUBSCRIBERS.
So, to the CRAZY "cherry pickers"/non-completists/selective collectors, whatever you want to call them - keep ranting and raving. You'll still be able to get your figures, be it through Matty or eBay, because we're picking up your slack.*

*please note - if you only like four MOTU figures a year and don't want to be locked into a sub, this message is not for you. It is for the jackasses who populate the messageboard linked above who can't accept any other opinion and view the negative side of every post that comes from Mattel, even when there isn't one.